We arrived in Lajitas for our visit to Big Bend after a two hour drive from our overnight stopover in Fort Stockton.  It was everything I imagined it would be: hot, dry, dusty, and desolate.  Our home for the week was the RV park at the Lajitas Golf Resort.  Lajitas is located between Big Bend National Park and Big Bend Ranch State Park.  It was originally a key transportation point for the mining towns of Study Butte and Terlingua.

Big Bend National Park covers over 800,000 acres and is located in a large portion of the Chihuahuan Desert.  The Rio Grande River spans 118 miles of the southern boundary between the United States and Mexico.  Big Bend is the most isolated and least visited of the national parks in the contiguous United States.  It is also a dark sky designated park.  The primary attraction of Big Bend NP is the hiking and backpacking trails.  Our first day at the park, we took a 5.5 mile round trip hike to The Window.  The trail descends from the Chisos Basin lodge about 8oo feet.  It was quite easy walking down the trail, but the trek back up was challenging.  The view from The Window made it all worthwhile.  Adele handled it like a champ.  She did get quite a few rides on Craig’s shoulders, though. 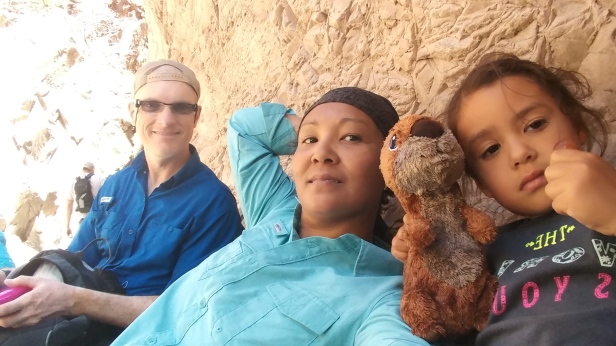 Day two found us on far easier trails.  Our first hike was on the Tuff Canyon trail, only .6 miles.  Tuff Canyon is named for the material of the canyon walls, volcanic ash that has hardened into rock like formations.  The surface is very soft and brittle.  Farther up in the canyon is hardened lava flow.  You’re supposed to turn around and go back out the way you came in once you reach the lava rock.  However, Craig had us climbing up the side of the canyon wall!

After scrambling up the canyon, we moved on to the Santa Elena Canyon trail.  Another short hike, about 1.6 miles, this trail crosses Terlingua Creek and follows the banks of the Rio Grande.  This time of year, the creek was dry.  However, during wetter months, it could become impassable.  After crossing the creek, the trail leads up the canyon on a series of switchbacks that are more than a little heart stopping.  It was like walking the path up to Mordor.  Once at the top, you can look back towards the north at the Chisos Mountains and across the river is Mexico, only a few hundred feet away.  The trail stops at an overlook where the river flows towards a wall too steep to ascend. 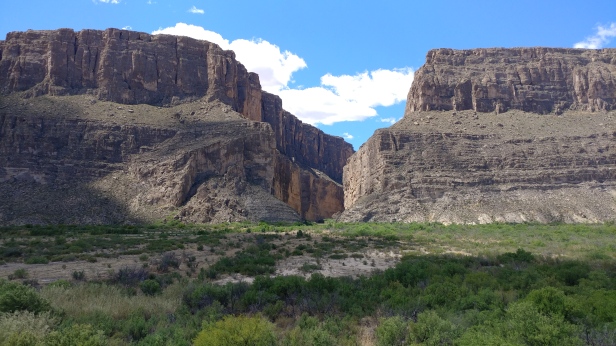 Our final day at Big Bend was another easy day.  We took in the Rio Grande Village Nature Trail where we stood on the banks of  Rio Grande just a few feet from the border and viewed the village of Boquillas across the border from an overlook. 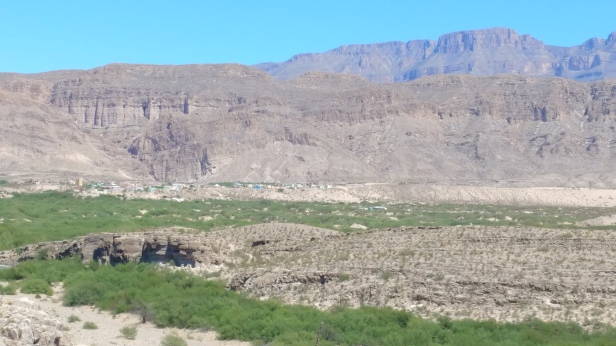 There are so many trails in Big Bend that three days wasn’t nearly enough time to see everything I wanted to see.  We didn’t even go to Big Bend Ranch State Park.  However, it’s time to move on to our last two stops in Texas:  Marfa and Balmorhea State Park.