When I first floated the idea of going to Alaska, Craig was skeptical.  The thought of driving that distance was daunting, especially at the beginning of our adventure.  After a bit more research, I discovered that you could take a ferry to Alaska from Vancouver Island.  Since we were planning on visiting Victoria, it was an easier sell for Craig.

Taking the ferry involves driving to the northern end of Vancouver Island to Port Hardy.  The ferry takes fifteen hours to sail to Prince Rupert on the northwest coast of British Columbia.  You can reserve a cabin but since the journey is during daylight hours, it isn’t necessary.  There is plenty of comfortable seating on the ferry.  We opted to upgrade to the scenic lounge where the all seats were recliners and we had 180 degree views.  Craig and Adele spent most of their time in the kids play area.

From Prince Rupert, you go through US Customs to board the ferry operated by the Alaska Marine Highway.  After being on the BC ferry, the Alaska ferry was a bit of a let down.  It was reminiscent of being on a Navy ship and could stand to use some upgrading.  Because the trip on the Alaska ferry was over twenty four hours, we had to get a cabin; traveling in your RV is not allowed.

There a quite a few stops along the way.  The ferry is the primary means of travel for many people who live in the towns on the inside passage.  Juneau, for example, is only accessible by boat or plane. 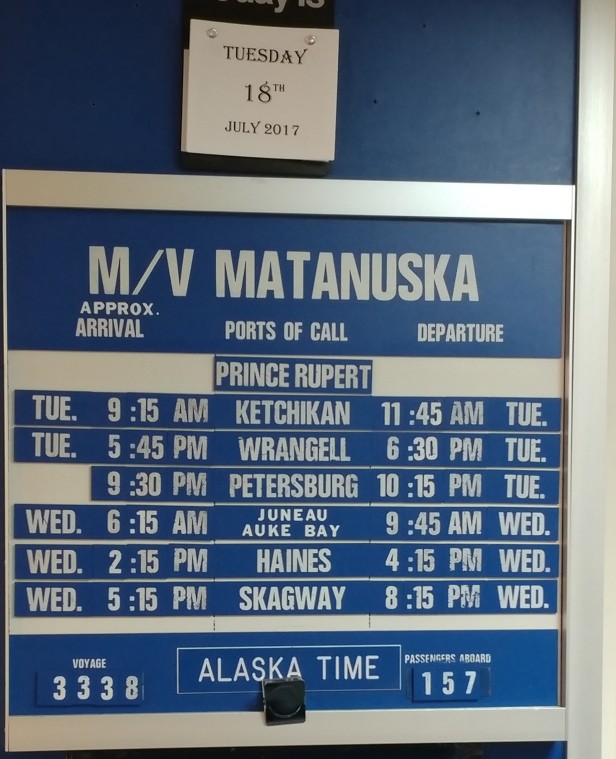 We chose to take the ferry to Skagway.  There were three large cruise ships in port when we arrived so the town was crowded.  Skagway is a historical district with a large focus on the gold rush of the 1890s.

We spent two days in Skagway before continuing our adventure into Alaska.  Check out this video that Craig put together.